Size Matters is the seventh episode of Season 1 of Intelligence TV Series. It aired on 17th February 2014.

When Gabriel and CyberCom learn microscopic robots are infecting and killing leading artificial intelligence scientists, they must find who’s delivering boxes containing the malicious nanites before Cassidy is the next target.

The episode opens in Advanced Robotics Institute in Pittsburgh, PA. Professor Chris Donovan and his student Olivia is talking and when he departs he gets a phone call. He passes out and Olivia runs to him. He is bleeding from his nose. He is rushed to the hospital. He starts to bleed from his ears and some of his blood falls to the ground. The nurse says the blood is moving.

Back in CyberCom headquaters DNI Adam Weatherly shows Lillian and Dr. Cassidy a photo of a blood spilled on the floor. He explains to them the blood was apparently moving. When Cassidy says that killer microscopic robots are a scientific impossibility Lillian mentions so is the chip in Gabriel's brain. When Weatherly mentions Professor Chris Donovan was the victim Cassidy says he knew the victim. Donovan was an artificial intelligence professor.

of them was a friend of Cassidy. He is upset. Nelson tells the artificial intelligence scientists are a small community. Cassidy says they are not just scientist they are giants of the field. Riley asks whether they frequent in same places or go to the same conferences. Gabriel checks their e-mails and travelling records and tells them there weren't conference held recently. He pulls up the crime scene photos and tells that all the scientists received a yellow package shortly before dying. He says it had minimal postage making the boxes nearly weightless. Lillian tells they should check Cassidy's mail and he shouldn't leave the facility until whoever is responsible is identified.

Dr. Cassidy is examining the packages and Nelson is standing next to him while the others are standing behind. Nelson asks whether they are crowding him and if they are he should tell them. Cassidy says tad less heavy breathing will be helpful. Nelson tells the others to stop breathing. Cassidy opens a yellow package and the box inside. Nanites are displayed on the screen. Cassidy says live nanites will be useful. He remarks that most advancements in science is used for evil causes. He quickly exclude Gabriel. Chris tells the team post office tracked down the packages but one got slipped away. It's addressed to a Bryce Tyler. He is a protege of Cassidy and he asks Gabriel to save him.

Tyler's assistant have received the package and she puts on her headphones and turns on music drowning the sound of the ringing telephone. Gabriel and Riley race down to his office in Maryland. Chris calls them in their car and tells them he can't reach Tyler's office. Gabriel hacks into Tyler's phone and turns his silent mode off

and dials his phone. When he picks up Gabriel tells him he is a US Cyber Command agent and a friend of Dr. Shenandoah Cassidy. He warns Tyler not to open any packages since they think his life maybe in danger. Tyler mentions his assistant and abruptly ends the phone call. His assistant opens the package and the box. A dust is released and she breathes it in. There is a note in binary code inside the box. Tyler calls her assistant on her cell and warns her to not to open any packages that was delivered in his name. But she has already opened it. Riley and Gabriel rush into the office and Riley again forces Gabriel to wear gloves. They see the assistant slump over her desk. Riley checks for her vitals. Tyler arrives and Gabriel holds him back. Riley says the assistant is dead.

Bryce is brought back to CyberCom. He helps Cassidy analyze the nanites. They learn that the nanites are transferred through airbourne dust and they are programmed to attack a specific target. Tyler asks if anyone has decoded the binary code. Gabriel decodes it and tells the message is 'Welcome to the Future'. Tyler says maybe they aren't thinking small enough. He asks for an electron microsocpe and he finds a manifesto embeded in each number.

Nelson pretends to have such a program. When Gabriel finds a pattern and tells it matches to manifestos dend by a Gordon Greyson Tyler questions how he did it. Nelson says it is in his computer screen. Gabriel tracks an internet activity of Greyson to a warehouse. Tyler asks Gabriel what he is and how much of him is human. Gabriel tells him he's all human Tyler doesn't believe him. He says Gabriel is not all human. He then asks Cassidy whether he finally overcame his fear. Lillian asks Cassidy to take Tyler away. Cassidy leads him out of the room. Not before he asks Gabriel to embrace what he is. When Gabriel asks what that is he answers the future.

Riley and Gabriel drives to the warehouse Gabriel tracked Greyson to. Gabriel is upset and Riley asks whether Tyler got under his skin, Gabriel tells her shouldn't it be leather red. He tells Riley that she had a soy latte before checking her email and it'll be nice to come to work on Monday without knowing what Riley did on her weekend. Riley tells Gabriel that he knew she had a soy latte because he knew her not because of the chip.

They arrive on the warehouse. Gabriel says he can't see the inside. He uses his chip to hack into emergency fire escape button to lower a ladder. Both of them go in and they find a camera. Gabriel says the system is too encrypted and he can't access the camera. Riley replies that they have to do it the old fashion

way. They enter a room in the warehouse and find Greyson's workstation. They see a copy of Greyson's manifesto on the wall and Gabriel compares handwriting. They are a match. Greyson sees Riley and Gabriel and shoots them. Riley tackles Gabriel to the floor and they go after Greyson. He asks which government agency they are from. When they reply they are from CyberCom he says he was expecting FBI or the CIA. He escapes through a trapdoor on the floor. Riley tries to go after him but Gabriel stops him saying Greyson activated an IAD. He says the tunnel Greyson is in leads to a empty warehouse.

They drive to the location. But Greyson has already exited out of the tunnel and escaped through a truck he had hidden earlier. Riley and Gabriel narrow down the make and model of the car through the tire tracks. With the help of Chris they find the truck Greyson purchased and his location. Gabriel hacks into the traffic lights to turn the light ahead of Greyson red. They arrest him and bring him back to CyberCom. 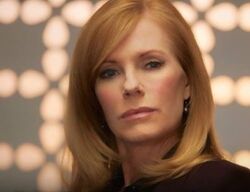 Gabriel and Riley interrogate him. He rants about how the government is the real terrorists. Cassidy tells to Lillian and Tyler who are watching the interrogation from the other room Greyson used to be a big shot scientist until he got scared that his inventions could render humans obsolete. Tyler is says it is nothing to be afraid of and tells Gabriel is the example. He says Gabriel is Cassidy's creation and neither Lillian or Cassidy is not keen on hearing it and they say Gabriel is not Cassidy's creation.

Meanwhile Gabriel and Riley's interrogation is going nowhere and he tells them government is planning on inserting chips on our brains not knowing Gabriel already has a chip in his. He says Frankenstein's monster will soon walk among us. Which makes Gabriel mad. He turns the cameras off. Lillian is mad and Tyler asks whether Gabriel did it. Which earns him a boot out of the room. Gabriel scares Greyson by revealing information about Greyson and tells him he has only thirty seconds to reveal who is his next targets. Riley's cellphone rings and Greyson starts to bleed from his nose. Riley hits a button on the wall.

Greyson dies and Lillian asks what happened inside. Gabriel tells he was trying to scare Greyson. Lillian tells him he's not so special he can disregard standards and protocols.

Nelson and Cassidy conducts the autopsy of Greyson. They figure out the nanites were activated remotely. They tell the rest of the team about it. Cassidy says even a phonecall could activate the nanites. Riley says she got a phone call from a blocked number when she was in the interrogation room. Lillian says no one could penetrate CyberCom's shield and they figure someone from the inside called Riley's phone. Only suspect is Tyler and they see a video of Tyler dialing his phone right around the time Riley received her phone call.

Riley and Gabriel goes back to Tyler's office. Lillian warns them to be careful because Tyler send himself a package and killed an innocent girl to cover his tracks. They arrive in his office and Gabriel hacks into his cell phone. He says Tyler didn't use it to make the call. They figure he used a burner phone. A countdown on a cellphone hidden behind some books goes off and the phone rings. Nelson says to his father that his phone is ringing. Cassidy says it isn't his phone. He bleeds from his nose.

the nanites' killing process. But since the nanites can adapt it will just be a matter of time. Cassidy says his goodbyes to Nelson and Gabriel. He tells Nelson he wish he could see his children. He tells Gabriel he wishes that he'd be able to see the things he can do with the chip. Cassidy starts to bleed again from his ear. Gabriel refuses to give up and goes to see Tyler who is in the interrogation room. Tyler messes with Gabriel's head and tells him he is a different species. Riley tells that Gabriel is warmblooded. Somehow Gabriel figures out a way to save Cassidy. 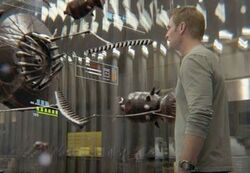 He tells the others all they have to do is to stimulate Cassidy's death and nanites will die thinking their job is done. Nelson says it might work since if one dies all of the nanites will die. Chris and Gabriel pours ice over Cassidy's body to lower his body temperature. Gabriel hacks into nanites and creates a cyber render to monitor nanites dying process. Cassidy flat lines and Nelson asks whether the nanites died. When Gabriel says they died Nelson and Chris tries to revive Cassidy. When all hopes is lost pulse is finally read on the heart monitor.

Cassidy interrogates Tyler who is not very surprised to see him alive. Cassidy tells Tyler they figured out the sequence that triggers the nanites. He places a yellow package and places the box on the table. Tyler says if he opens it Cassidy will be infected too. Cassidy says nanites only attack one target and he is willing to take the risk. He opens it and a dust is released. Cassidy tells Tyler to breathe it in. He then starts to dial the sequence on his phone. Tyler tells him to stop. Cassidy tells him the box contained sugar. Cassidy says Tyler was his favorite student but never was his brightest and that's why he had to kill off his competition.

Gabriel calls Riley way after their nightly check ins and thanks her for not thinking he is Frankenstein's monster. He asks her for a snack date and she agrees.

Retrieved from "https://intelligencetvcbs.fandom.com/wiki/Size_Matters?oldid=5911"
Community content is available under CC-BY-SA unless otherwise noted.